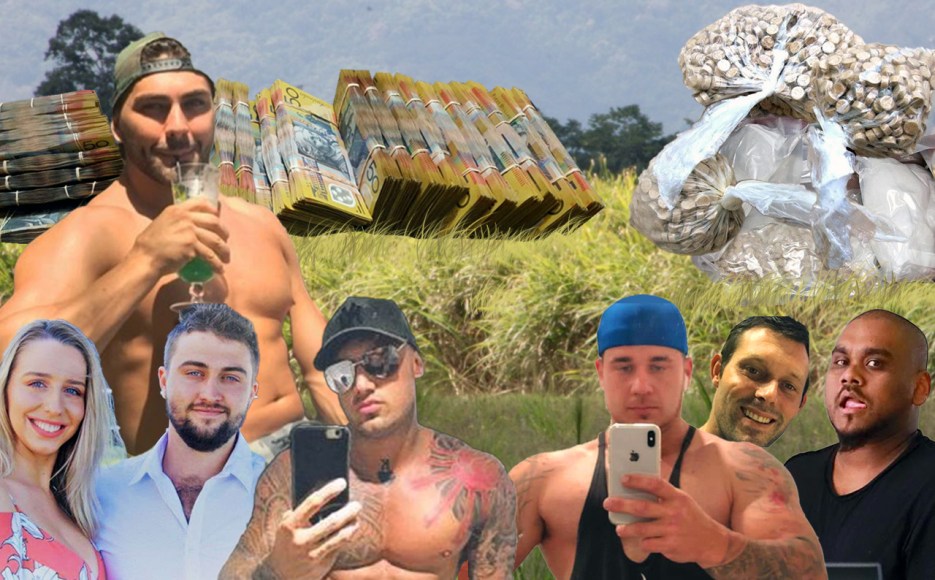 THE mammoth 14 year jail term issued to Ryan Henry Hill tells a disturbing tale of a kid from a sugarcane farm who became the fledgling kingpin of regional Queensland’s boldest drug trafficking empire.

The rise and fall of Hill’s wholesale drug dealing operation is coloured by flash cars, snitching, gym selfies and dizzying sums of vacuum-sealed cash being exchanged for “many, many kilograms” of drugs.

The players involved would communicate using encrypted Blackberry phones and make transactions at local drop points, which included a hidden culvert beside fields of Edmonton sugarcane.

The main product was crystalised methylamphetamine, commonly known as ice, but Hill was also pushing thousands of ecstasy tablets and several ounces of cocaine in single transactions.

When he was finally arrested in October 2018, some $95,000 in cash was found buried in a crop at his father’s property. There’s no suggestion Graham Hill was involved.

Hill and six others were eventually snared in Operation Oscar Aymara, a protracted police investigation carried out by Far North Queensland’s Major and Organised Crime squad.

Kieren Wilson, one of Hill’s main ice customers, confessed to police that he alone was purchasing up to a kilogram of ice at least every second week for two years, paying Hill a total of nearly $1 million.

Wilson was sentenced in closed court. His jailed term is understood to have been reduced significantly because he provided police with damning evidence against Hill. Cocaine wholesaler Matthew Hilton was sentenced to a whopping jail term of 10 years over his role in the drug ring.

The Cairns Supreme Court heard that before Hill was arrested, up to an estimated $1 million worth of drugs, addressed to fictitious recipients but later linked to Hill, was intercepted by detectives.

Hill made his trafficking more discreet as a result of the interceptions. He engaged Jamie Payet, a regional branch manager of Toll courier services, to have the drugs trucked into Cairns.

The contraband was packaged inside cheap microwaves in Sydney by Sandeep Dharan, a bus driver who became a “warehouse man” employed by the suspected importer.

Dharan described being overwhelmed on one occasion when he tried counting a batch of money he received from Hill, which he was to then pass on to the original drug source.

In sentencing Dharan to seven years jail, Justice Jim Henry said, “it’s hard to quantify how many drugs were pumped into the Cairns community by your selfish aiding of this enterprise”.

WAREHOUSE MAN: Sandeep Dharan, and a photo he took of a package of cash he received.

Ryan Hill was owed collectively nearly $700,000 by clients when he was arrested, giving some indication of the scale of the operation.

All but one of the arrested members of the drug ring are now behind bars.

Even 24-year-old Hanna Glatthor, girlfriend of Ethan Hill, was convicted on a guilty plea over the operation.

The former bank manager, originally from the banana farming capital of Innisfail, received a good behaviour bond for money laundering after she stored and passed on drug money totaling at least $210,000.

The court heard she was a reluctant participant in the operation with no criminal history, but was bound by family loyalty. No conviction was recorded.

Hill’s source of the drugs, Lebanese businessman and suspected importer Kalid Kanj, fled to Beirut when his home was raided. He hasn’t been seen since.

Crown Prosecutor Nathan Crane told the tropical court in Cairns that Hill’s peddling of “a kilogram of methylamphetamine, routinely,” was unique.

“It’s so unique that there only are a small number of people who have the ability to pull this off,” Mr Crane said.

But in the end he didn’t pull it off.

Hill, who started out as an electrical apprentice, will be a prisoner of Lotus Glen Correctional Centre until at least 2030, having already served some of his sentence while awaiting trial.

His brazen conduct was further exemplified when, while on bail, he took to Facebook to threaten client Kieran Wilson for giving police evidence against him. An extra year was added to Hill’s jail term because of the threat.

He also bragged about sleeping with a police officer’s girlfriend while he was on bail.

To make it appear as though he was still employed as a tradesman, Hill wore a high-vis shirt and drove a Hilux ute while carrying out the trafficking.

The court heard he would give his employer cash which was then transferred into his bank account to give detectives the impression he was receiving a wage.

Hill owned a BMW but dreamt of buying a C63 Mercedes – just like the one driven by Kanj in Sydney. He managed to buy a speed boat before police swooped – the vessel is now seized as proceeds of crime.

DRUG MONEY: A speed boat purchased by Ryan Hill but now seized by police as proceeds of crime

Former friends who grew up around Edmonton have told the Caller that Hill’s drug dealing was “the worst kept secret in Cairns”, and that his downfall was inevitable.

But even locals who’ve been following the court case are shocked at the scale of the operation that’s now been revealed.

Lotus Glen Correctional Centre is famed for its program of putting prisoners to work on jail-run fruit and vegetable farms as part of their rehabilitation.

In a twist of irony, Ryan Henry Hill – the kid from the cane farm who became a convicted drug trafficker – will now be back on the farming tools while he’s locked away.

ELECTION 2020: Candidates in the seat of Warrego

WATCH: All the action from the Rockhampton PBR

ELECTION 2020: Candidates in the seat of Southern Downs

Thumbs up, Button up: Jockey and trainer in double victory at Rocky TAB meeting

ELECTION 2020: Candidates in the seat of Condamine